Apple on Monday announced a raft of new services, including original TV programming and news and magazine offerings, at an event held at the Steve Jobs Theater in Cupertino, California.

The Apple TV+ service, which will launch in the fall, already has a number of high-profile shows in its lineup:

Oprah Winfrey appeared at the Apple announcement event and revealed that she has been working on two documentaries for TV+ — one about the toll of sexual harassment, assault and violation in the workplace, with the working title, “Toxic Labor,” and another that will be a multipart series about mental health.

She also said she intends to build “the biggest, the most vibrant, the most stimulating book club on the planet” on the platform.

Along with Apple TV+, the company announced Apple TV Channels, an aggregation service for offerings from cable and satellite networks, as well as HBO, Hulu and others.

“Acting as an aggregator may be a way for Apple to hedge against its original content not doing well,” said Ross Rubin, principal analyst at Reticle Research, a consumer technology advisory firm in New York City.

Pricing for the new services was not announced.

In a departure from its business model, Apple is offering Channels and TV+ content on devices not made by the company.

“We know you’re going to want this great experience on every screen in your home, so we’re doing something we’ve never done before,” Peter Stern, Apple vice president for cloud services, told the audience on Monday. “We’re bringing the Apple TV app to smart TVs.”

The app will be included on smart TVs made by Samsung, LG, Sony and Vizio, he said. In addition, it will be available on Roku and Amazon. 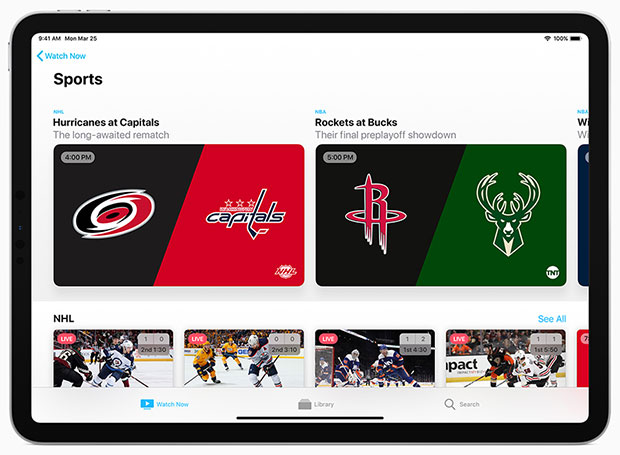 “This is a big, big step for Apple,” said Maria Rua Aguete, executive director for media, service providers and platforms at IHS Markit, a research, analysis, and advisory firm headquartered in London.

“It means they’re opening a world that they weren’t willing to open before,” she told TechNewsWorld.

“It’s going to give them access to 9 million homes in the U.S. that have smart TVs,” Aguete added. “Content is important, but distribution is important as well, so it is important for them to be available in as many devices as possible.”

Apple TV+ is not just about seeking a new growth market.

“It is about a technical shift to connected smart services of the future that offer everything online,” said Mark Skilton, a professor at the Warwick Business School in the UK.

“But is Apple really going to beat Netflix?” he asked.

“Even if they roll out the red carpet for movie stars, it will be a challenge for Apple to provide a compelling new TV experience,” Skilton said.

“This is a risky move for Tim Cook. I remain unconvinced he is the right leader for the next generation,” he added.

“The company’s track record lately with the Apple Watch and home speaker does not bode well for a new TV launch that is really just more of the same,” added Skilton. “It is not reinventing the TV and content market the way the iPhone did for mobile communication.”

“It’s one thing to redistribute content, but it’s an entirely different proposition altogether to create content,” he told TechNewsWorld.

“With Apple’s No. 1 consumer brand position, all Apple can do is go down if consumers dislike or are offended by its first-party content.” Moorhead said.

Apple also announced a new News+ app, which will contain more than 300 magazines, along with electronic subscriptions to The Wall Street Journal and the Los Angeles Times.

Subscriptions to News+ will be US$9.99 a month, with the first month of the service offered free.

Conspicuous by their absence from Apple News+ were The Washington Postand The New York Times.

Financials may have played an important role in the newspapers staying away from News+, said John Carroll, a media analyst for WBUR in Boston.

“Apple is taking 50 percent of News+ subscription revenues and dividing the rest of it among the publishers,” he told TechNewsWorld. “That’s a less lucrative deal for publishers than selling subscriptions through the App Store where Apple only gets a 30 percent cut.”

All the News Fit to Curate

Data collection is another hangup newspapers have with services like News+.

“When you turn your content over to this other platform, it gets most of the benefits that can be data mined for readers,” Carroll explained. “That loss of control by the Times and the Post would also be a deterrent to joining News+, especially since the newspapers are already doing well selling digital subscriptions on their own.”

Curation of new stories also could become an issue for publishers. For example, Apple has said it will emphasize general news content from The Wall Street Journal and place financial news in a secondary tier. So the Journal has announced it will be hiring more reporters to cover general news.

“That brings up the issue of, will Apple news start dictating what types of content it will showcase and influence the editorial judgment of some publications?” Carroll pointed out.

“That could be very troubling to any number of news organizations,” he said.

All You Can Eat Gaming

Apple also announced a new credit card and a subscription game offering at its event on Monday.

The Apple Card lives in the iPhone, although you can get a physical card if you want one. The card, backed by MasterCard and Goldman Sachs, offers low interest rates, no late fees and daily cash-back rewards.

The card is an admission by Apple that adoption of its Pay product isn’t growing as fast or as widely as hoped, observed Pund-IT’s King.

“Tim Cook emphasized the point that Pay transactions have passed 10 billion annually. “While that seems like a big number, it’s a tiny fraction of the total number of credit and debit card transactions conducted every year,” he noted.

“If Apple can significantly alter the credit-debit card landscape, it would have a huge impact on both the company and the industry,” King added, “but so far, Apple’s attempts to insert itself into credit-debit payments has been less impressive than its claims.”

Apple Arcade is a gaming subscription service that the company will launch in the fall in 150 countries. It will have more than 100 exclusive games, all of which can be downloaded and played offline.

“Arcade gives developers a chance to monetize games that have been slow to gain an audience,” Reticle’s Rubin told TechNewsWorld.

It also gives Apple a chance to strengthen its position in mobile games, where it is already a stong player, he added.

“Apple Arcade leverages one of the company’s most successful services — the App Store — and includes some intriguing exclusive new content that is likely to attract gamers of every sort,” King noted. “That said, it seems to be a less ambitious effort than the new Stadia platform and service that Google announced last week.”